'Making & Breaking Pattern' was curated by Judith Duquemin as an extension of the 'Fabrication' show that she had curated at The Tin Sheds in Sydney.  This exhibition involved Elizabeth Day, Judith Duquemin, Shaun Morrow, Giles Ryder, Justin Trendall and myself.

From the invitation - 'Through a breaking of the convention of pattern-making the conceptual realm of the artists' intention is revealed.  Pattern becomes a vehicle for expressing variation as opposed to the more mechanical functions of pattern-making: repetition, symmetry, balance and rhythm.' 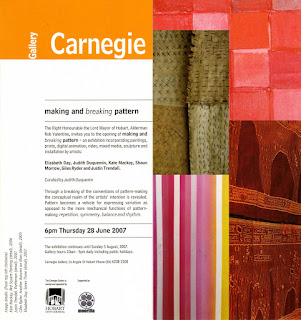 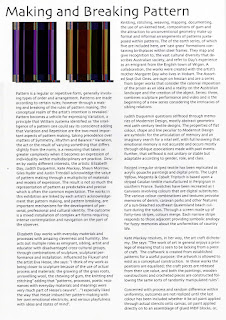 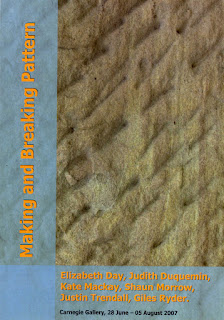 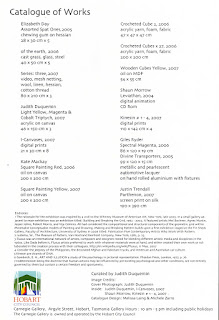 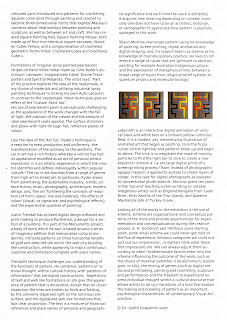 As well as the regular inside showroom, Factory 49 also has an outside wall area under the stairwell in the car park that is on show 24 hours a day.  The work is in place for approximately 3 months, then the next artist installs a new piece.  The artist can use any part of the wall that is painted white - I chose to only use the large rectangle.

My piece was called 'Space Blue Space' as it was based on a house paint colour called 'Space Blue'.  I divided the rectangle into a 4 x 4 grid - the first space (top right) used straight 'Space Blue', the next space mixed half blue, half white - this was continued until all the spaces were filled and each dilution was positioned as far as possible from the previous... 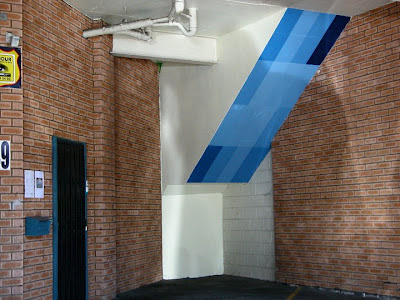 Posted by Kate Mackay at 6:04 AM No comments: