Between 2000 and 2003 I did not get to show very much - just the one painting in the Blue Lotus show - and it was becoming slightly discouraging.... Then Elizabeth Pulie and Jay Balbi opened their space called Front Room and invited me to show.
I called the show 'Square One' as that described how I felt about my practice at the time, as well as describing the work that I had begun making - works about squares, returning to first principles... I exhibited a combination of oil paintings, gouaches and works made from paper. 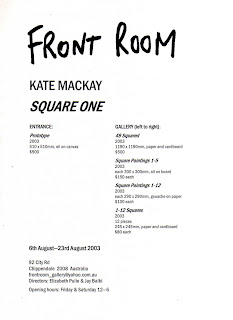